Monster Hunter World is a triple A action role playing game that captured the eyes of real hardcore gamers.

The game Monster Hunter has always been one of the best game franchises in history, but Monster Hunter World exceeded all expectations even by Capcom itself.

The game sold 12.6 million copies in all platforms combined, and it comprises 20% of all 53 million copies sold by the whole Monster Hunter franchise.

Regardless of the huge and very active community, the game’s rating is not really that much compared to other triple A games in the market nowadays. It only scored 6 out of 10 on Steam, though most of its negative feedbacks were dated from when the game was released.

We scanned the reviews through Steam to find the reasons of its low rating, and we found out that a lot of the negative comments came from players who quit abruptly due to the fact that the game was difficult for them and the weapons were not user friendly.

While it is true that all 14 weapons have very unique mechanics, practicing what you really like would benefit your hunting life a lot. Also, it is imperative to know that some weapons can be effective against a certain monster but may be less effective against others.

So if you are a solo player, it is important for you to know which weapons you should look after.

Just sit tight and continue reading as we unfold the top 10 best weapons in Monster Hunter World for solo players. This weapon may not hit as hard as other weapons, but you can get a lot of mobility in using this. Some of the ammos can shoot at very far distances, keeping you safe from any monsters you encounter. Just a downside though, even if the weapon is extremely easy to use the weapon can be very complicated in terms of builds. It has tons of build setups that a beginner may find difficult to understand. Switch Axe is a very powerful weapon in Monster Hunter World which utilizes stored energy (phial system) to deliver strong attacks against monsters. This weapon has two main forms; the axe mode and the sword mode. The axe mode has less damage but will give you good mobility and it is also a pre-requisite to utilize sword mode’s powerful attacks.

The sword mode on the other hand inflicts more damage than the axe mode but will make you less mobile.

The sword mode also uses phial charges which you can obtain/charge while on axe mode.
You can switch between modes to inflict huge damage and at the same time maintain mobility. The Switch Axe may be difficult to master because of its complexity and its powerful attacks can be often slow, but once you get used to it, shall then you will realize its true potential. 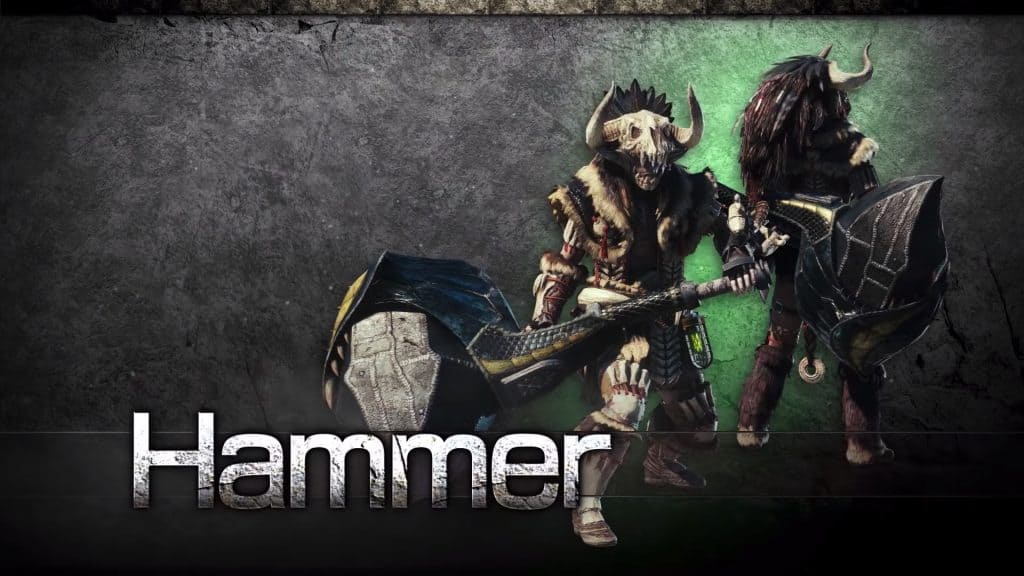 Hammer according to most users is the most fun to use in Monster Hunter World. If you are the type of hunter who wants to inflict status ailments to a monster so you could land stress-free hits, then hammer could just be your weapon of choice. This blunt weapon can stun monsters multiple times in the whole duration of the hunt giving you the chance to deal free hits against ANY monsters.

You just need to make sure that you will hit the head to inflict stun status on the monster, and when the stun status ailment reached a threshold, then the monster will simply fall on the ground giving you a lot of time to hit further. 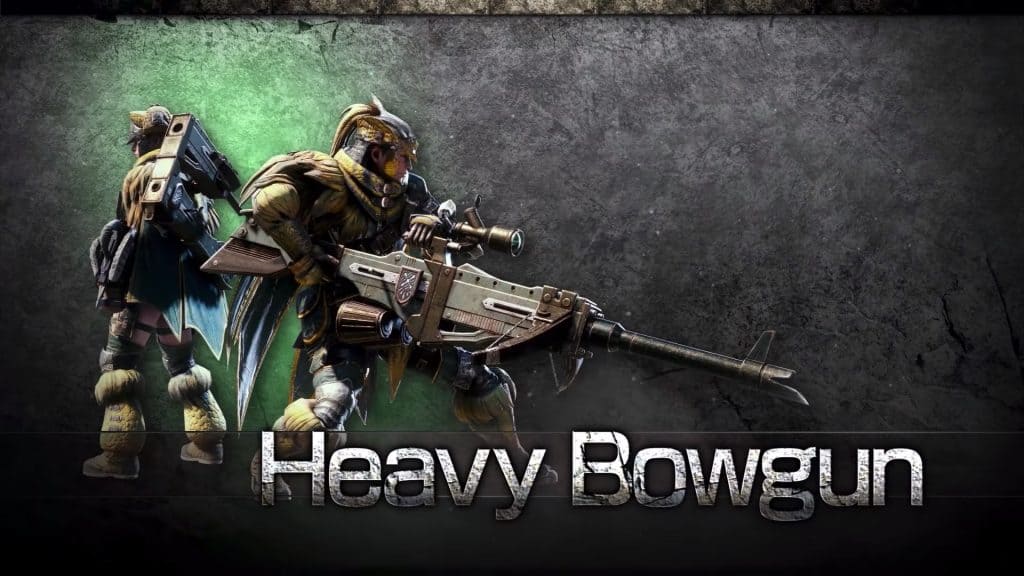 Heavy Bowgun is definitely the best in terms of damage per second, making this bad boy a weapon of choice for many speedrunners. Take note that the very first player to solo Behemoth (the strongest monster in MHW to date) used Heavy Bowgun, and Behemoth is one of the two monsters that have a fixed HP pool. This means that its health points is the same regardless if you fight it alone or with other players.

Though Heavy Bowgun is the best damage dealer, it requires very rare equipment to take advantage of. It also has very complicated builds comparable to light bowguns, and is definitely the least in terms of mobility. It can equip a shield to make up for the huge mobility loss, but you wouldn’t be able to guard all attacks until you get to equip a shield jewel (guard up) which is extremely rare. If you are into glaives or Kung Fu, then this weapon might be just for you. Insect Glaive as the name goes is a glaive weapon in Monster Hunter World with an added feature – the kinsect. The Insect Glaive is a very versatile weapon that lets you leap into the sky while attacking airborne. This weapon is also good when used mainly while on the ground, but if you want to mount monsters so you could stagger it for free hits, then the aerial gameplay is what’s best for you.

Each of the insect glaives also have their own unique kinsects which you can summon to inflict damage and status ailments against monsters. The availability of your kinsects during hunts are limited, and you could see a gauge filling so you will know when it is available. Use it at the right place and time, and you will surely finish your hunt in no time – even when playing solo. Without a doubt, Dual Blades is the fastest and the best weapon in terms of mobility. You will be sprinting most of the time when using this weapon, and you will be able to inflict countless attacks against monsters. You can use demon mode to further increase your speed in the expense of consuming a lot of stamina, and once you hit the monster enough to fill your demon gauge, then you will be able to improve your demon mode further into arch-demon mode.

Arch-demon mode will enable you to do new movesets which you can’t perform while on just demon mode. These new movesets are extremely powerful but highly limited, so you need to analyze when is the best time to switch modes during your hunts. Another melee on this list is the Charge Blade. The Charge Blade is a very powerful weapon in Monster Hunter World that will surely hasten your hunts regardless of the monster you are against. What makes Charge Blade unique from other weapons is that this weapon has a very powerful special move which IGNORES enemy defenses. This means that you can literally hit any monster part even if it is a weak spot or not.

Just like Swtich Axe, Charge Blade also follows a phial system which lets you charge energy and use it on another form to deal a huge amount of damage. Charge Blade have two forms; the sword and shield form, and the axe form.

Just like Switch Axe, you will be charging your phials while you are in sword and shield form. What’s good about the sword and shield form is that you would be able to guard attacks from monsters, making you more safe than the switch axe. The Charge Blade when in Axe form can perform a special charged attack called SAED which deals a huge amount of damage regardless of which monster part you land it. Greatsword is the strongest one-time damage dealer weapon in the game. This weapon though is very slow, and most of the time you will be charging attacks to deal more damage.

However, this weapon made it to our top 3 list because despite the sluggishness and the annoying charge time, the damage it inflicts especially when it lands a weak spot is just very satisfying. Depending on how good your greatsword weapon and build is, this weapon can deal 4 figures of damage that could literally 1 shot dead selected monsters.

Another good thing about this weapon is that it is very easy to build, and the best greatsword to date can be obtained through an event (every hunter’s dream) which is very easy to accomplish. So if you are this hunter who is struggling to obtain good weapons and jewels, then Greatsword might just be a good alternative for you. Bow is without a doubt the best all-around weapon in the game, especially when playing solo. It is relatively easy to use, it is extremely fast, and it has a very good range. The bow also is one of the best damage dealer in the game, 2nd only to Heavy Bowgun (though some pro players were able to out-perform heavy bowgun users in terms of speedrunning selected strong monsters).
The Bow is only our top 2 because bow builds are very complicated in nature and very expensive.

You need a lot of rare jewels to make your damage really good, and you consume a lot of stamina while performing your combos. To out-perform other weapons in terms of damage, you need to spend stamina modifiers like dash juice which is very costly. There are builds to correct its costly nature, but this can get complicated because you can only apply limited skills on your build, while the bow requires many skill sets to dominate. 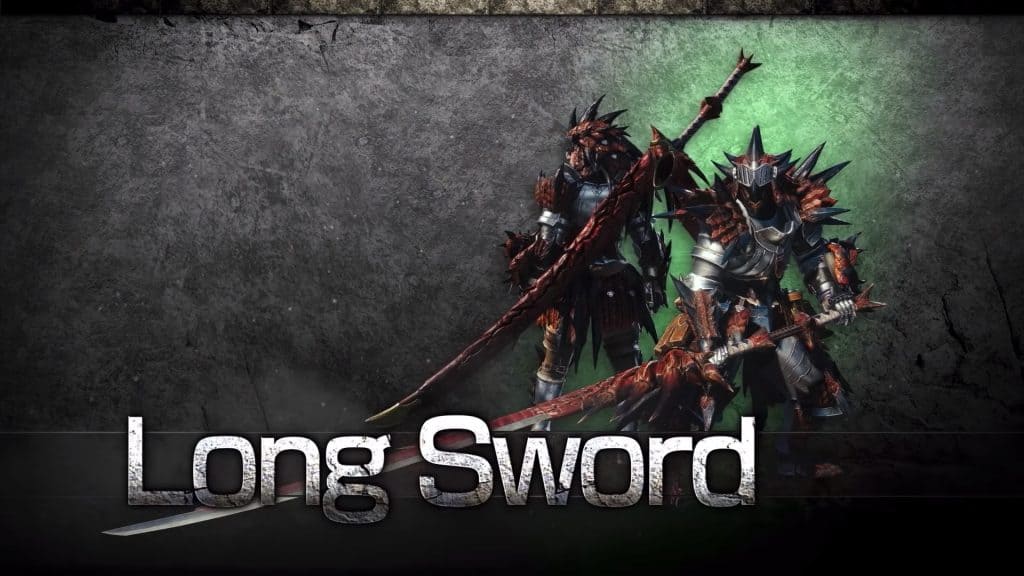 Finally, the top 1 on our list and potentially the best overall weapon in Monster Hunter World is the Longsword. The Longsword is an all-around weapon that will slay every single monster in the game in no time. It is a weapon of choice for speedrunners, and though it can’t inflict damage as much as bow and heavy bowgun users could, this weapon can make you evade monster attacks better than any other weapons in the game.

The longsword is still one of the best damage dealer in the game, but its counter attack move which is the foresight slash makes the longsword a favorite for many hunters. You will also be able to fill a spirit gauge as well which increases your damage. This spirit gauge will deplete overtime, but you can refill it by hitting monsters. You can also perform unique attacks when your spirit gauge is filled, so make sure to keep your spirit gauge filled during your hunts.

So these are the top 10 weapons for soloing in Monster Hunter World. Take note that these review is based on the weapons popularity, overall ratings, and reviews. Also, all of the weapons in the game have their own specialty.

As said earlier, one can be effective against a set of monsters but not on others. Practice is the key to dominating the game, and this review is intended to give you ideas only of what you may want to try. In the end, it is you who will choose what’s best for you and our ultimate advice in choosing a weapon is this – “Don’t think, feel!”. Contents Keep in Mind before you Build:Building the Enchanting room:Some Tips regarding Enchanting rooms: It is pretty simple to make the best Enchanting room in Minecraft, whether it is to get the max possible enchantments…