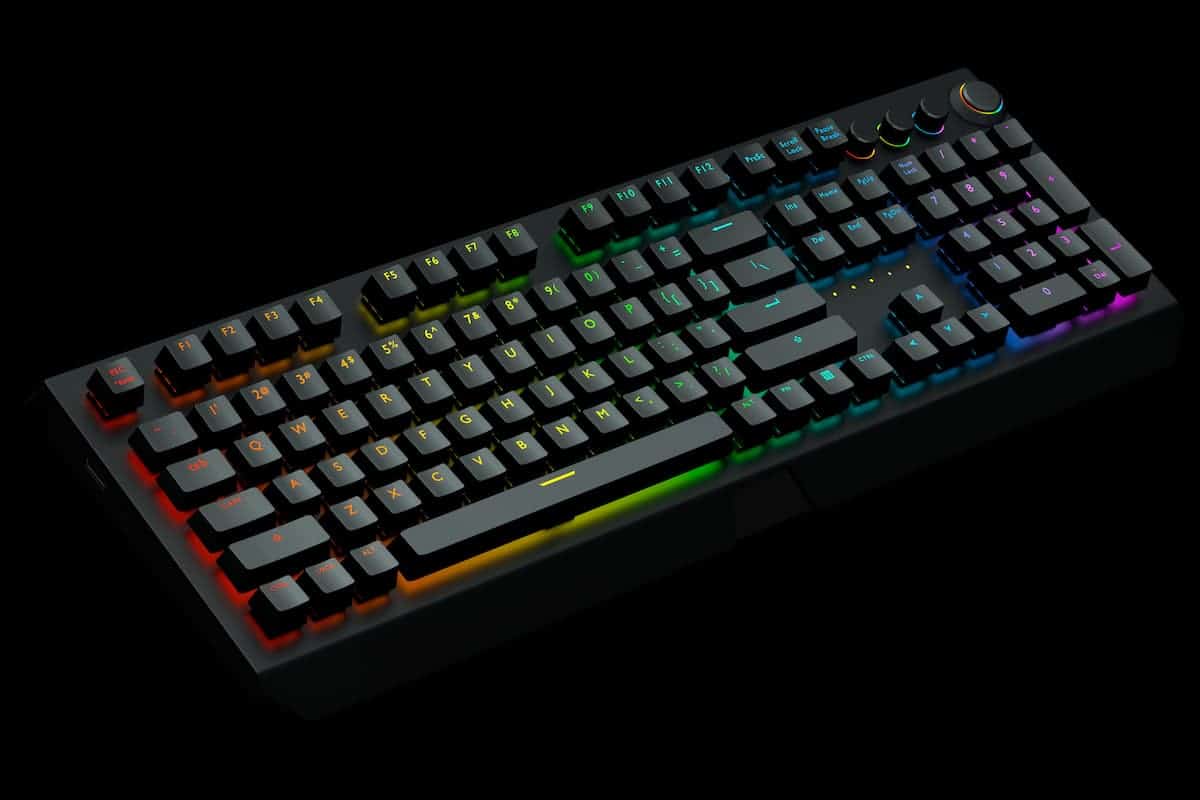 If you have ever taken a look at gaming accessories, you may notice that many of them feature an array of shifting colors. This feature is called “RGB,” which stands for “Red, Green, Blue,” the primary colors of a spectrum wheel. Most RGB keyboards and other accessories will rapidly shift through dozens of color configurations, creating a unique and customizable experience for the gamer.

Many gaming keyboards have RGB because the lighting and color patterns can increase the keyboard’s visibility in dark lighting. However, the customizable nature of RGB also looks fantastic and allows gamers to customize their keyboard to look however they want.

Let’s talk about why so many modern keyboards come with RGB backlighting and housings. I’ll explain why multicolor backlit keyboards have become so popular and discuss the benefits of using one yourself. So, let’s get into it!

Why Do People Want RGB Keyboards?

The psychology behind RGB is complex and storied.

Some thinkers, such as Doctor Marcus Carter, a Senior Lecturer on digital cultures at Sydney University, believe that the attraction towards flashing lights reflects the development of new and customizable technology. Scholars like Carter see the RGB phenomenon as a parallel to car culture and its tendency to be flashy and novel.

However, the draw towards RGB isn’t just about aesthetics. It’s also about practicality – at least, to some degree.

People want RGB keyboards because they look cool, improve visibility when gaming, and allow gamers to customize their gaming experience. Gamers spend a lot of time at their keyboards, and having an aesthetically pleasing, well-lit way to type can make gaming more pleasant.

RGB keyboards usually have other features ideal for gaming, such as mechanical keys and a wired connection. The backlighting is also often customizable, which is pretty, but it can also help you be more accurate while typing.

Features such as keys that light up while you hit them, custom lighting modes for specific gaming controls, and more can make you a more efficient typist and gamer.

However, the RGB color wheel has become such a mainstay in the world of gaming peripherals that it has begun to be parodied both inside and outside the industry.

Some more reserved gaming communities may scoff at the prevalence of RGB keyboards and other peripherals. However, the phenomenon certainly won’t be going anywhere soon, especially if people continue paying top dollar for rainbow-colored keyboards.

Is an RGB Keyboard Worth It?

If you’re looking to buy a gaming keyboard, you may expect to spend a pretty penny. If your gaming keyboard features a scintillating array of RGB colors, this can add a surprising amount of money to the price tag. The reason for this is mainly grounded in supply-and-demand. Colorful keyboards are popular, and so they cost more.

RGB keyboards are worth it if aesthetics are important to you when building a gaming PC. Some gamers prefer a more minimalistic style, but colorful setups have become a considerable mainstay in the PC gaming market.

They are often mechanical, making them perform more responsive, and they hold up to more strenuous usage. These keyboards also have features such as anti-ghosting (we’ll talk more about that in the next section of this article).

In the end, whether or not an RGB keyboard is worth it will be up to you. If your preferred PC gaming experience involves many bright colors, you will likely have no problem shelling out a little bit more for an RGB keyboard.

What Are the Advantages of a Mechanical Keyboard?

Most low-end keyboards on the market are “membrane keyboards.” They use a sheet of pliable material underneath the keys to manipulate the buttons below. These are fine for regular usage, but they can be finicky and feature-bare when doing more demanding tasks such as serious hardcore gaming.

Mechanical keyboards are more responsive, sturdy, and provide more tactile feedback when pressing keys. They often also have features such as anti-ghosting, which are essential to a streamlined gaming experience.

The keys on a mechanical keyboard consist of a cap, a stem, and housing. The keycap is the part of the key that displays the letter or character. The stem is the internal mechanism that presses the switch. Finally, housing is the case that holds all of these other components together.

In addition to being sturdier and more responsive, these keyboards also deliver a much more tactile experience than a membrane keyboard.

“Ghosting” refers to the tendency of cheaper keyboards to limit key input. Low-end keyboards can only detect about three key presses simultaneously. Three keys may not be enough to perform the tasks at hand when playing some video games. Anti-ghosting keyboards can receive many more simultaneous inputs, making the keyboard much more responsive for gaming.

Why Are Gamers Obsessed With RGB?

The RGB meme has become a prevalent in-joke among many people of the PC gaming community. Flashy setups and rainbow battlestations are the defining features of modern PC gaming. Even people with more reserved setups tend to have at least one peripheral that constantly changes color.

Gamers like RGB accessories because they look cool, improve visibility when gaming, and allow gamers to express themselves by customizing the colors on their peripherals.

However, some gamers, mainly those not interested in building their PCs, simply purchase RGB peripherals because they are widely available. As it stands today, it can be more challenging to find a non-RGB gaming keyboard than one with RGB in some areas.

So, even if some people don’t want a flashy setup for low-light gaming, there aren’t always other options for such a low cost and such high quality.

RGB accessories, particularly keyboards, are a characteristic cornerstone of PC gaming in today’s world. RGB keyboards, mainly mechanical ones, provide practical advantages when gaming, and they look cool to boot. Even though the RGB feature has become an in-joke for the PC gaming community, it remains a mainstay that has a place among the battlestations of today’s PC gamers.

If you’re in the market for a new gaming keyboard, thinking about all the different customizable colors is something you should consider.