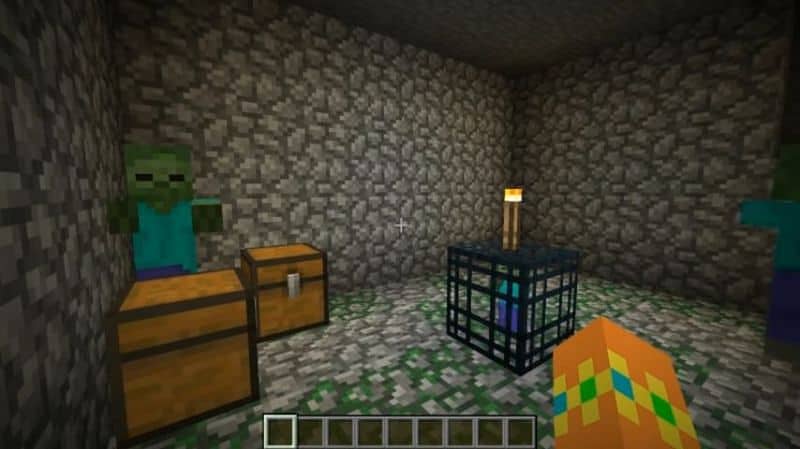 How to find a Dungeon in Minecraft is quite a challenging task and depends on luck at most times. This is simply because of Dungeons being a random chance spawning in the world. Although, there are ways that we can minimize the randomness of finding one and increase the possibility of coming across one.

You can usually find a Dungeon in Minecraft Java in underground Cave Systems. There’s no specific altitude (Levels) where Dungeons usually spawn, they can spawn at any level assuming if it’s near a Cave. They’ll be close, next, or inside the Cave usually, so be aware of any Mob sounds that you come across.

They spawn using an algorithm that every World Chunk, it makes 8 attempts to spawn any Dungeon in that Chunk. We can explore each Chunk for a Dungeon (as long as there is a Cave system).

A Minecraft World Chunk is 16 blocks wide, and 16 blocks long, at 256 blocks high. A possibility that a Dungeon within the chunk the Cave is in will spawn, so be mindful to check the surrounding areas and listen to any mobs nearby

More or less the same with Java edition, they can be found in cave systems, but can be generated above Sea Level, which is beyond the Y=62 and up block layer. They are usually called Exposed Dungeons.

A Dungeon will usually be made of Mossy Cobblestone in a 5×5, 5×7 and 7×7 square rooms. This is the common landmark you would want to find when exploring, Dungeons have a chance to add 1 or 2 chests in the Dungeon, and 1 Dungeon Type Spawner in the Middle.

Zombie Spawners have 50% chance to be in the Dungeon.

Skeleton Spawners have 25% chance to be in the Dungeon.

Spider Spawners have 25% chance to be in the Dungeon.

Dungeon Spawners follow a few conditions to be able to generate besides being near a Cave System. The Floors must be solid, Ceilings must be solid, which works with Sand and Gravel, and a Dungeon must have 1 or more openings. This gives the game a greenlight to generate a Dungeon within the Chunk.

As said before finding a Huge Cave system would be the most help you could do, as finding a Dungeon is by luck at the end of the day.

As said before finding a Huge Cave system would be the most help you could do, as finding a Dungeon is by luck at the end of the day.

Finding a Desert Biome would also be of help where a Dungeon would spawn near Ground Level and will be obvious if any sand has fallen prior to being there, either a buried Dungeon or not.

Mineshafts belong to large cave systems, and Dungeons are common in this area as well. Not just Dungeons alone, you can also find a Cave Spider Spawner which are found in Mineshafts.

When exploring in such places, your Ear is the best tool, as Dungeons are loud with Zombies, Skeletons or Spiders, so focus on listening to anything that may sound like a possible Dungeon, and dig your way to it.

Rare but possible, Two or Three Dungeons can spawn within the same Chunk, or nearby Chunks, so be aware if you’re experiencing the same.

You can find Dungeons using an X-ray texture pack which makes you able to see through blocks from far away, you can take a look through in surrounding places and potentially find a Spawner placed somewhere.

Using websites like Chunkbase would just need your World Seed, which will analyze your world and send you the coordinates of any found Dungeon.

Only works if you’re a starting in a new world, you can go find an existing world seed on a forum or any social site that players have already explored, which they’ll provide the World Information, so you don’t need to find it yourself.

Best thing about finding a Dungeon is the items you can gather from it, Dungeons usually come with 1 or 2 chests, and it’s a nice payout when you eventually find one. Here is an image of items you may find in a Dungeon’s chest.

I hope this has helped and given you insightful information on How to Find a Dungeon in Minecraft and Dungeons themselves. Dungeons are important places to start creating stuff like Mob Farms, so using every bit of information in this guide would guide you in seeking one out. Happy Dungeon Hunting!